From our days of shouting “Look Ma, no hands” when we first balanced a two wheeled bike, we’ve looked to others to recognize and hopefully applaud our accomplishments. As artists we would be advised to seek constructive criticism from others who are sensitive to the process of creating art and are aware that our art is a personal expression of who we are.
I believe as oil painters we travel the path to master our craft with a common goal of accurately expressing our view of the world with our own recognizable style. Some of us have been on the path longer than others and have reached this specific goal. It is not a race and every artist travels at his own pace.
When one declares themselves an artist they become one with other artists who understand and appreciate the process of laying bare your emotions on canvas. It would be unfair to compare a beginning artist with an established artist; realistically, to compare artists is like comparing the “incomparable” apples and oranges.
I offer two critique stories about my art work and the lessons I learned. As a young artist I was thrilled to even call myself an artist. I moved to the desert southwest, immediately connected with a gallery and an article was written about me in the newspaper. New in town I hoped to meet other artists and soon an offer came to sketch and paint at the home of a local art patron, Winifred. Winifred, known as Win, loved the arts and artists. She built a state of the art studio behind her home, hired models and invited local artists to her facility.
After several weeks I felt comfortable with the group and was approached by Win’s daughter, also an artist, who suggested I might bring some of my paintings for Win to view. I agreed and thought it might help me progress to the next level. So I arrived at the next session with six of my freshly painted desert scenes for Win to critique.
I lined them along a wall and Win began to pace back and forth in front of them. It seemed like ten minutes went by and the suspense was unbearable. Then, what did my naïve, wondering, artist’s ears have to endure? Scathing, emotional, colored words spewing from Win’s mouth. I couldn’t believe her vicious tone as I gathered up my paintings and fled, resembling a beaten dog dragging his tail between his legs as she yelled after me, “How you think you are able to paint at all is the ultimate question!”
After the attack I came back the next week to sketch because I was afraid I would never create art again. It was my last visit. I realized her attack was unprofessional. A critique would have suggestions about composition, perspective, edges, color harmonies or some useful hint to improve. And if someone had forewarned me, I could have tried to thicken my skin to tell the old “Win Bag” she was in no position to critique art. Her critique was emotional, lacking constructive criticism and thus was not a critique at all. So there!
My second critique story is short and sweet. At a workshop at Kevin Macpherson’s studio in Taos, his class was outside painting around his pond. I could overhear his suggestions to the other students and every comment he offered was very positive. When he got to me he told me an area in the upper left of my 8 x 10 painting had some nice qualities to it. I actually thought it was messy looking but realized it conveyed more emotion than the other more precisely painted areas. Near the end of the workshop I told him about my observation and asked if he ever pointed out something wrong in a student’s painting. He said, “I encourage the artists with the things they are doing right and hope they will figure out on their own what isn’t working for them.”
What a contrast between these two critiques: one tore me down and the other built me up. I learned that a critique is really just an opinion. However, when expressed by a professional artist who has painted acres and acres of canvas and speaks from that experience with positive suggestions, it is invaluable. Learning to paint is a process and patience is to have its reward when all the disparate elements of creating art come together for you to create the art you dream about.
As a footnote, writers are artists too and the majority of the OPA Guest bloggers are practicing artists sharing their knowledge and insights, much like Kevin Macpherson did with me. OPA’s talented web designer has created this blog for us to enjoy with a simple way to send a comment to the bloggers to let them know if they connected with you.
Feedback inspires us and everyone benefits from reading other artist’s comments. 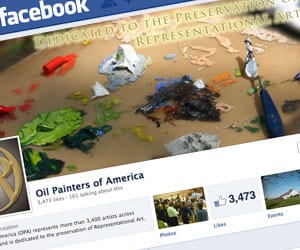 Facebook could be as important to artists as their favorite supplies. I sensed this when the general manager of a prestigious Scottsdale gallery told me that when all else failed, Facebook helped him locate an artist he wanted to invite into the gallery to exhibit. He believed if an artist had a web address, they would also have a Facebook page as part of their marketing plan. This seems an incredible story unique to our times and I frequently relay it to artists who profess they don’t have time for Facebook.
In addition to finding the perfect oils, brushes and supports to create your art, an untapped audience could be waiting on the other side of your screen, so to speak, to connect with you and your art. Recently, a prolific plein air artist and popular instructor posted local scenes and paintings created on his trip east and photos of Sargeant’s works from the Boston Museum of Fine Arts. I “traveled” with him and anticipated his daily posts. He posted “Thanks so much everyone for your congratulations and encouragement. It really means a lot to me.” Art is emotional and unsolicited constructive feedback is a gift.
When a quick critique is needed to save a piece gone awry a Facebook post of “what do you think this painting needs?” can bring every imaginable solution. I enjoy artist’s posts of “just finished, still on the easel” paintings in the studio or plein air works still on outdoor easels positioned to show the view of the painted scene. Posts of paintings sold right off the easel and paintings juried into prestigious shows send an immediate thrill throughout the art community. The sharing of friends’ achievements becomes the community’s collective success.
Artists like to share supplies they love. I was unaware of Vasari oil paints until an artist posted that the company sent her entire palette as a gift. Comments immediately appeared from artists who swore by that brand. So Facebook not only informs, but teaches. CW Mundy posted a painting with a glazing technique and when queried offered steps to achieve the effect. An artist commented “the mark of a great instructor is one who uses every opportunity to teach”. I was impressed and surprised to consider Facebook as the art community’s personal arts “channel” and discussion forum.


It is a high honor for an artist to have their work juried into the national OPA exhibit and artists shared their stellar news of acceptance on Facebook. Later posts appeared of artists alongside their award winning paintings to connect with a broader audience. I enjoyed seeing Jeff Legg next to his painting and award, offered my congratulations and thanked him for posting it. I also sent a private message to Melissa Gann who won our RayMar award. She responded with “Thank you for creating the memorial award. I am so honored to be the recipient. You and Emily do so much for the art community through RayMar.” Comments like Melissa’s are humbling and create excitement among sponsors and ultimately collectors to become more involved.
So after some solo time in the studio artists can tap into the Facebook art world for the latest news and even the possibility of a sale without ever leaving the studio. I know because I just concluded my first facebook sale. I saw a posted painting I loved, contacted the artist and made the purchase. It was immediate and I could send a message directly to the artist to express my emotional connection with the painting.
Facebook can be a waste of time if you are undisciplined, but as a fresh way to connect with collectors, gallery directors, workshop instructors and art buddies to build friendships it is unsurpassed. Facebook is an exciting part of my day and I’m happy to have the opportunity to share my thoughts about some of its advantages with you as OPA’s guest blogger.