Way back in graduate school we were taught the importance of designing our drawings in such a way to influence the viewer’s eyesight so it traveled through the drawing and picked out the most important elements before moving on to the next drawing or piece of manuscript. At the time I was training to become a medical illustrator and our audience was surgeons who were studying how-to manuals for performing various surgical procedures. Our drawings were step-by-step instructions on how to do everything from an aortic valve replacement to brain surgery.
The attention span of our audience was very short but we were taught the reader was much more likely to remember a series of drawings showing a surgical procedure than mountains of text. Little did I know how important that training would become as I pursued my current artistic endeavors. What I learned is simple…it all starts with design. Mother Nature is a really good designer but sometimes she needs a little help when it comes to painting her likeness on a canvas. To demonstrate what I mean I photographed a recent painting from start to end. By following me through the steps I hope you will come to understand that there is more to copying a landscape to canvas. You must engage the viewer and you do that with design, color and controlling the viewer’s gaze. As is my custom I will be painting from the field study I painted on a trip to Carmel a couple of summers ago.
On a 24″ x 30″ canvas I begin my design by dividing the canvas into thirds ending up with nine equal squares. My objective is to arrange the elements of the landscape in such a way that the viewer’s eye will be in constant motion and to do that I purposely place objects where the horizontal and vertical lines intersect.
At “A” the base of the rock lands exactly on the crossing lines. The angled line runs from “A” towards “B”. At “B” the vertically angled tree takes you up to the intersecting top third line. The shoreline runs from “B” to “C” where the base of the cliff lines up with the right side vertical line and also lines up with the right side of the main boulder back at “A”. The next drawing shows how the eye moves around the painting. The plan is to have the viewer enter the painting at “A”, visually travel to “B” over to “C” then back down to “A” where the process starts over. If I pull this off the viewer will become engaged and visually travel through my entire painting.
You still with me?
Next I lay in a halftone drawing using a reddish wash to give myself a better look at the design before I commit to paint. I decide I need a “visual block” to keep the viewer from sliding off the right side of the canvas so I add a large dark boulder at the bottom right. I will add a dark element to the lower left of the painting to give it some balance. I’m thinking a dark bush of some sort. Detail of the foreground rocks
This was a blast to paint. Most of it is made up as I go, changing colors and shapes of the rocks to give it an organic feel.
The finished painting, or so I thought
Once this was finished I put it in a closet for a month and did not look at it again until this morning. Once it was back on the easel I felt something was missing. I decide it needed something else to draw the viewer away from the rock pile and up the hill to my center of interest. By adding a splash of color on the hill representing the poppies and other wild flowers that grow on the coast I believe the painting is now finished. “Notan” is a Japanese term referring to exploring the harmony between light and dark. Artists use Notan sketches to explore the composition elements of a scene and the relationship of major shapes. A good Notan drawing simplifies a scene into three values…dark, light and halftone. It also acts as a memory and planning tool that helps the artist focus on essential elements of a scene, draw simple shapes and record important elements should the scene change as weather and sunlight alter a scene. 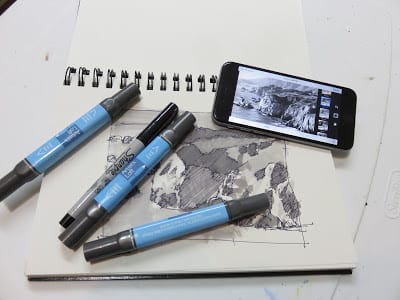 I was first introduced to the importance of the Notan sketch in a workshop I took with Skip Whitcomb. Skip starts every painting session with two or three quick sketches of the scene. The process takes him about thirty minutes. As part of the workshop Skip required students to do at least three sketches before starting a painting. Since that time I have come across many artists that rely on the Notan sketch process and for years it has been my practice as well.
The advantage of a Notan sketch over a camera is the camera records everything in the scene indiscriminately leaving nothing to the imagination. That being said I have come to prefer the camera over the sketch as the smart phone increasingly takes over every aspect of our life. Using the photo app in my iPhone has reduced the time to produce a Notan to a matter minutes rather than a block of time that cuts into painting time.
I recently took the opportunity to produce a Notan sketch and a Notan photo to decide once and for all what my routine was going to be going forward. Below are my results. 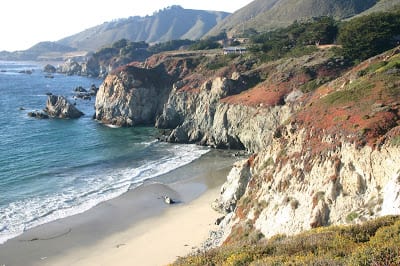 South of Monterrey on the way to Big Sur is this amazing scene, painted by many. On the day of my painting the fog was rolling in and out all day constantly changing the light. The scene was so captivating it was hard to decide what to leave in and what to take out. It was the perfect time for a Notan sketch so by the time I put brush to canvas most of the major decisions would have already been made. 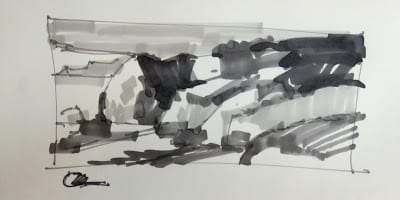 Like many plein air painters my “go to” format is the horizontal on a 9″ x 12″ or 12″ x 16″ panel. I also like the long, narrow horizontal format I use frequently in Texas due to the lack of mountains or anything taller than a fence post. My first inclination was the long horizontal as seen in my Notan which took about ten minutes.

Just for kicks my second sketch was a square format and my third sketch was my usual horizontal. 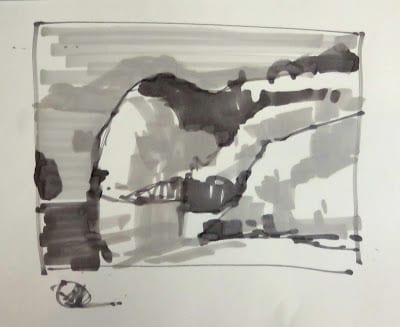 The whole process took longer than expected because of the fog that would come in and obscure the distant cliffs that I wanted to include in my painting so all total it took almost forty minutes to get the sketches done.
Simultaneously when the sun was just like I wanted, I took a single photo with my iPhone and as the fog destroyed my scene, I quickly opened the photo app
to look at the scene in different formats. 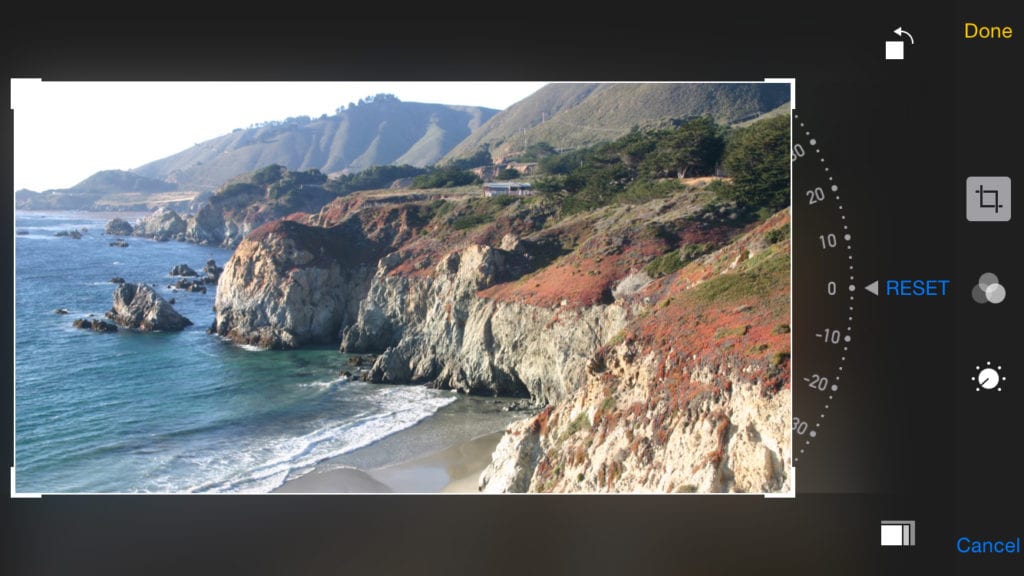 I first looked at the long, horizontal format, cropped it accordingly and saved the image for future reference. 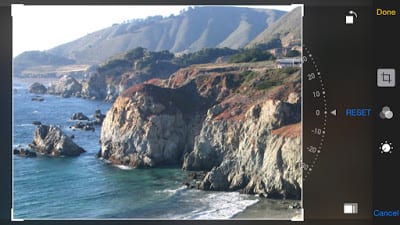 Then I cropped the same photo in the more typical horizontal for a 9″ x 12″ painting. Again I saved it for later. 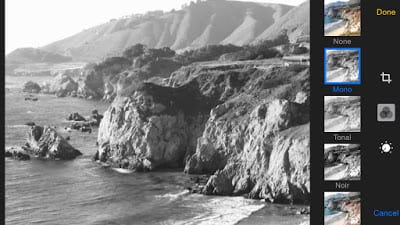 Then I used the halftone filter to give me a Notan photo of my scene. The whole process took less than ten minutes which is an important consideration when the goal was to produce four paintings this day. 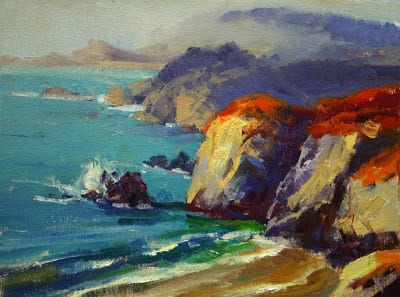 “On the Way to Big Sur” 9″ x 12″ oi/linen
When it came time to paint, the fog became unavoidable. In the end I gave in and included it in my painting, but the Notan exercise was well worth the effort.

Below is another example of sketch versus photo Notan.

There is something that makes me feel more “artistic” drawing Notan sketches before beginning a painting. But at the end of the day, for me at least, its all about evaluating the scene for composition and values and the iPhone provides me the quickest means to an end while also providing me a permanent record. In less than ten minutes I can produce several Notan photos with complete halftone evaluations of my scene and I think it gives me a clearer understanding before I begin to paint.

Beyond packing plenty to drink, a midday snack and lots of sunscreen, painting en plein air can go from a beautiful day with Mother Nature to a fight for your life if certain precautions aren’t taken before throwing on the back pack and heading down a trail. I have painted plein air for almost twenty years and in that time I have encountered my share of treacherous weather changes, more snakes than I can count, rutting elk, a very upset larger than life brahma bull, wild pigs, bobcats, two black bears and bandits intent on taking my wallet. That does not include the number of times my life hung in the balance as I negotiated a narrow canyon ridge or large trucks narrowly taking off my backside as I painted on side of the road.
Over the years I developed a healthy respect for how quickly things can change when painting outdoors and have developed my own personal set of safety precautions along the way.

I hope you found this blog helpful and maybe gave you some food for thought on how to make your plein air experiences safe. If you have any safety tips that you use, not mentioned in the blog, please share. Happy painting everyone.