While we were working outside, her repeated, disarmingly funny, admonition was, “Paint what you see and keep it simple: after all, this is not rocket surgery.” She encouraged her students to relax and let the scene choose us, let it reveal itself to us; that requires calm and quietude. It is much more courteous and respectful than the smash-and-grab technique that I thought I wanted to learn.
Ray Roberts was working with rapidly changing light because, as luck would have it, we had rare weather blowing through the desert while we were out there, including riotous thunder storms! It was exhilarating to watch him work; he engaged the constantly changing light by constantly changing canvases! I know I would have decided to stay in the studio if the weather were unpredictable like that, but he taught us to move with the weather, to let it speak to us and take dictation so we could report our experience later. Our steno pad was the canvas, 8×10’s quartered, so that we could make four 4×5 inch paintings of the changing light. If he ran out of spaces, he tossed one canvas panel to the ground and picked up another, never chasing the light in one piece, but letting every change have its own space to speak. And again, he wasn’t slapping on the paint at 90 miles an hour; he was brief and deliberate, making exact notes that would bring a flood of memories back in the studio. His experience in the field was respectful and joyous, and that was conveyed in both the sketches and in the studio painting he did from them.
Here are some of the field studies done by Ray, and the studio painting that sprang from them: 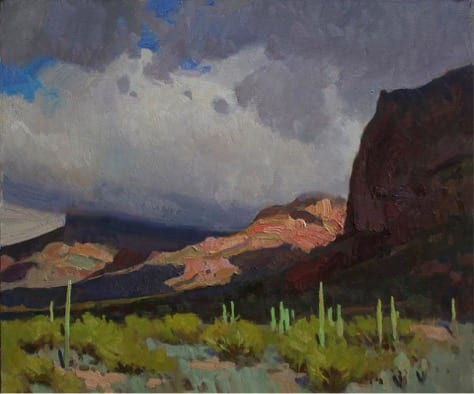 Notice how pieces of the studies found their way into the final painting, which truly captured the spirit of the experience, even though that single scene only existed in his mind’s eye.
Having been a runner, I know that there are some people who are good long-distance marathon runners, and others who are good short-distance sprinters; there are very few people who are good at both. There are master artists who enjoy the quiet, drawn-out pace of a marathon painting, working weeks or months (or years!) on a single piece, but who could not do a one-hour demo in front of an audience to save their own life. Then there are master artists who absolutely love the adrenaline-fueled fast pace of the quick-draw events and are astonishing in their ability to nail a sketch in one or two hours, but who could not spend any more time than that without going stir-crazy, and would never re-enter a painting that’s been “finished.” But! Sprinters do run long-distances when they are in training, and distance runners do train by running sprints for the same reason: it makes them better at what they’re good at.
So there are sprinter-painters who start out with a bang and run full-tilt to the tape, and there are marathon-painters, who have a relaxed stride and who pace themselves to endure a long run. But here’s the thing: painting is not a performance art. Jill’s right: the thing that will outlast us is the body of work we leave here. Focusing on speed, even if I secretly still want to paint fast, is focusing on the wrong thing. Use speed-painting as an exercise, not as a standard of excellence. Paint a lot! Remember, a million miles of canvas is one of the things it takes to make a great painter. And the more a person paints, the better a person learns to say more with less. It will happen at some point that it will take less time to do that well.
Ray Roberts and Jill Carver are able to produce masterpieces in the studio that are gleaned from their work in the field. They are also able to produce truly inspired pieces in the field because they are out there working in all weather, day in and day out: they are good because they train and hone their gift.
So now that the Year of Painting Fast is half over, I’m reassessing. Sometimes a person has to readjust their goals in order to be true to their purpose. My real purpose is to be the best artist I can be, and maybe I, personally, can’t do that by painting fast. We who call ourselves artists have chosen to run a road that is not easy, but we love it and that’s why we’re here. Applaud the sprinters, cheer the marathon runners, and enjoy your own journey. Press in happily and hard to the thing that makes your heart skip and sing when you paint. There are a lot of things going on out there but we really don’t have to do them all; we’re not failures if we don’t do them all. We need to just do our best thing in the very best way we can. Getting to do what you love is such a rare thing. We shouldn’t ruin it by wishing we could do something else. I think the thing I was starting to lose in my quest for quickness was the experience of just enjoying spending that time doing what I Iove to do! That old adage, “haste makes waste,” is an old adage for a good reason: it’s true! Haste could waste the thing that made you start on this road to begin with: the joy of painting.
So I’m adjusting my sights for the second half of this year: the point is the product, not the pace; this is not a race! I’m going to write a card to stick to my Soltek: “Haste Makes Waste~ Embrace Your Pace.” Even if I still feel the need for speed!

Kim Carlton
Kim Carlton is an American representational oil painter, writer, and teacher based in The Woodlands, Texas. Kim studies and paints the landscape, the figure and the still life with an eye toward understanding light. She is a member of Oil Painters of America, American Artists Professional League, American Impressionist Society, Artists’ Fellowship, Outdoor Painters Society, Portrait Society of America and the Salmagundi Club. She is represented exclusively by RS Hanna Gallery in Fredericksburg, TX. www.kimcarlton.com
Visit Author Website